Withdrawing From a Coupon Haze 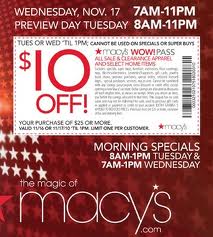 I’m going through withdrawal.
It’s not about smoking, or, heaven forbid, something more sinister, although sometimes it feels like it.
It’s about coupons.
For weeks—scratch that—months, leading up to Christmas, I was a coupon-clipping maniac. I scoured the newspaper, mail, internet, you name it, for any little scrap of paper that promised an additional discount on merchandise already on sale in the stores. And yes, it had to be on stuff that was already discounted at a sale price. I never, ever, start at retail.
Given the desperation of stores to recoup some profit in these lean times, I never lacked for coupon deals. At one point, I had eleven Macy’s coupons in my bag. I would have had an even dozen, but I gave one to my mother—only because I had a duplicate. Much as I love my mom, there’s no way I would have parted with a Macy’s coupon before Christmas if it had been the only one of its kind in my purse.
Sorry, Mom. Blood may be thicker than water, but Macy’s coupons are thicker than both.
The Macy’s coupons were by far the most prolific, but by no means the only ones maintaining residence in my handbag. There were discounts for Kohl’s, Sears, Yankee Candle, Model’s, Dick’s Sporting Goods, New York and Company, Boscov’s, and on and on and on. At one point, I counted thirty-one crumpled pieces of paper lying in wait for the grasp of my coupon-fever-induced, sweaty, palm.
I was coupon-addicted. I absolutely refused to leave the house without a thorough search and organization of coupons for the day’s shopping strategy. But it paid off. Big time. Scores on designer clothes, accessories, housewares, jewelry…even shoes. No matter that at one point I lugged home three pairs of boots for my daughter before I settled on one and had to drive back to two stores to return the others. The ones I kept I got for twenty bucks. Thanks to my coupon, of course.
But that’s all over, now. Just yesterday, I completed the purging of my purse, ridding it of the final vestiges of expired coupons. I almost found myself weeping as I pried the last of them from my clenched fist.
I suppose it’s all for the best. There’s just no way I could have kept up the frantic pace, the constant searching, clipping and hoarding, not to mention that the extra paperwork in my handbag was starting to make me walk like Quasimodo.
Maybe I’ll even ask my mom out to lunch. Now that there are no Macy’s coupons to stand between us, she might actually be talking to me again.