This Week in Entertainment–Revolution and Gilbert and Sullivan

This week in Entertainment–
NBC’s Revolution and don’t forget to scroll down for details on the
Bucks County Gilbert and Sullivan Society’s “Autumn Cabaret!” 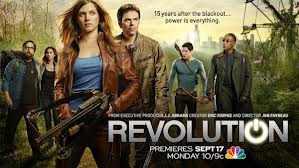 Remember when we weren’t all tethered to phones, computers, Facebook, Twitter, blah, blah, blah? When life was about more than how many “bars” we had keeping us connected?

Ah, those were the days.

Or maybe not. In NBC’s new drama Revolution, Mondays at 10 PM, we get to see what life might be like if we were all suddenly disconnected. I mean really disconnected, as in, the power–all of the power–goes out.

Set in a future that looks disarmingly like the past (and is frankly reminiscent of The Hunger Games), the former United States has fallen under military rule–a crude, fear-based “government” initially formed to restore some semblance of order as marauding bands of thugs threaten to destroy any pretense of civility.

But the leaders, headed by one General Monroe, intent on finding the secret to turning the power back on, have themselves become the thugs, as they track down and then kill Ben Matheson, one of the men they believe holds the secret to what happened and how to reverse the blackout, kidnapping Matheson’s son, Danny. Danny is the bait for in an effort to flush out Miles Matheson, Ben’s brother and the other man Monroe suspects knows what’s behind the outage.

Searching for her brother and recruiting her formerly unknown Uncle Miles for the hunt is Charlie Matheson, the show’s Katniss Everdeen character, a whiz with a bow and arrow. And figuring in the mix is a small pendant, a secret room with a computer, and a reason for this whole mess.

It’s engaging, entertaining and well acted. Whether it can be sustained before the audience gets tired of seeing the cast tramp through fields wielding knives and fighting like well trained ninjas (when did that happen?) remains to be seen. Check out the trailer below and tune in to decide for yourself.

Oh, and put down your cell phone. It won’t do you any good during the Revolution.

And now for the musical portion of our program! 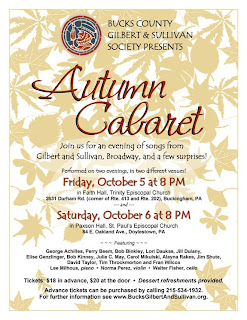 Join the Bucks County Gilbert and Sullivan Society this Friday and Saturday evenings for a delightful night of song and refreshments.

Featuring wonderful vocalists, including our own George Achilles, husband of NRFGP world-renowned illustrator, Pat Achilles, the program includes G & S tunes as well as Broadway favorites. Musical accompaniment is provided by the talented Lee Millhous on piano along with members of the Bucks County Symphony on violin and cello.

Tickets available at the door for $20. For pre-show purchase of $18, or for more information, contact www.bucksgilbertandsullivan.org.