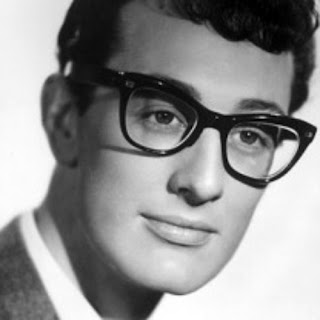 I was born in 1960. And at that time, rock ‘n roll had already made its way onto the music scene. So, while I heard Buddy Holly’s name mentioned, and I did know a few of his songs, I didn’t know his fascinating story. At least until the other day, when I took in the play: The Buddy Holly Story.
How much of the story is historically accurate, I don’t know. But I do know that the major life events were–mainly thanks to Wilkepedia.
Born in Lubbock, Texas, Holly had a dream of playing his own brand of music for widespread audiences. His unique rock style broke through musical barriers, as he and his band ‘The Crickets’ made history with hits such as Peggy Sue and Oh Boy. As they made their way through concert tours, Holly married his wife, Maria Elena, within five hours, meeting her at the reception desk of a NYC record company. But as fame would have it, Holly wound up splitting with ‘The Crickets’ after alcohol took hold of his band members, causing performances to be less than perfectionist Holly required of himself and his band-mates. After going it solo, Holly continued to soar, only to have his life cut short at the young age of 22. He and two other popular artists were killed in a plane crash in 1959.

Hitting the scene before Beatles fame, apparently their name came in response to The Crickets, as their American predecessor. Holly had something like 10 hits within 18 months, with his solo career beginning and ending the year he died. Don McLean memorialized his death in the song “American Pie”—known for the line, the day the music died.

If the show comes to your town, I highly recommend it. First of all, it is a 2 hour+ concert, making audiences sing along and clap their hands for much of it. And as I recall above, it is a wonderful story, but for a life ended far too soon—-as many famous, talented lives can be.

Holly’s hit list is long, including the well-know Maybe Baby, That’ll Be the Day, Great Balls of Fire, Peggy Sue and Oh Boy.

In Philly, the show can be seen until July 22nd; more info at: http://walnutstreettheatre.org/season/buddy.php