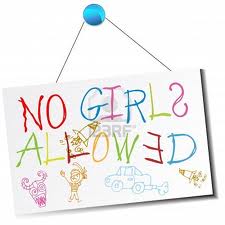 They really should put up a new sign—one that says what they actually mean.

The venerable Augusta National Golf Club puts on a good front. The holy grail of the golf world and home of the Masters Tournament is pristine, sophisticated and elegant. The sign out front of the club announcing that you are entering Augusta territory is understated, perhaps intentionally so. Yet, something’s missing.

What Augusta really needs is the same hand scrawled sign that has hung crookedly on the outside of every boys’ clubhouse since boys began building their exclusive little hideouts—No Girls Allowed!

Since the club’s founding in 1933, women have been deemed personas non gratis. Ladies can play on the course, but belong to the club as members? Heaven forbid. Augusta club chairman Billy Payne has repeatedly sidestepped the question put to him in recent weeks regarding including IBM’s new chairperson, saying only that “All issues of membership remain the private deliberations of the membership.” The assumed translation? “We don’t want any stupid girls in our club!”

I suppose I can understand the fellas’ hesitation. The last time a woman brandished a golf club around a major golf star, the results weren’t pretty. (Oh, I know Elin Nordegren only used the club to get Tiger out of the car after he ran into a tree. Sure she did.) My guess is it’s not the first time some of the members of Augusta ran afoul of a woman with access to a nine iron, nor will it be the last. But they can at least keep it from happening on their home turf. 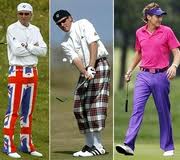 Of course the other possibility is that the men of Augusta just can’t bear the thought of losing a round to a woman. If they keep the gals out, they can hang onto the delusion that they are indeed the masters of the golf universe. That’s a lot of chest thumping for men whose attire regularly veers into lady territory.

My take, though, is that sometimes, men just want to play with their putters and their balls by themselves. They really don’t need women to indulge in that sport and having to make nice for a woman when they really just want to get a hole in one on their own and then knock back a few beers complicates their lives unnecessarily.

Let the boys keep their invisible No Girls Allowed sign front and center at Augusta. Those green jackets are an awful fashion statement. Plus, I’m pretty sure we women can find something better to do than watch the guys play with their putters anyway.