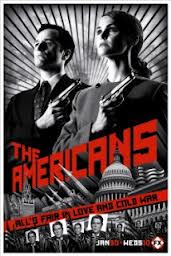 How are you supposed to embrace a TV show when you really want the protagonists to get caught, arrested and thrown in jail?

Elizabeth and Phillip Jennings appear to be the all-American family, living in suburban Washington, D.C. with their two kids, working, playing and acting like suburban Americans in the Ronald Reagan era. The key word is “acting.”

The “Jennings” are really undercover Russian spies, schooled in espionage and doing everything they can to undermine the United States, in the new FX series, The Americans, airing Wednesday nights at 10 PM.

Okay, maybe “hate” is the too strong a word. It’s wrong to hate anyone, even if they are only television characters. And actually, Phillip is somewhat sympathetic to the American way of life, especially given that his two children with Elizabeth are full-blooded American citizens.

Elizabeth, on the other hand (played by the usually adorable Keri Russell) is a steely-eyed, grim-faced American-hating Russian, through and through. It’s a wonder her own kids like her.

It’s also a wonder that no one is suspicious of these two, who, on the first episode, kidnap a defecting Russian spy and store him in the trunk of their car in the garage, eventually beating the crap out of him and killing him. Obviously, Liz and Phil’s kids are heavy sleepers.

The relationship between Elizabeth and Phillip is prickly, at best, but a warming trend in the first episode is, I suppose, intended to make the viewer feel some sympathy for the pair. I didn’t.

The premise is an interesting one, especially with the coincidental appearance of new neighbors in the form of an FBI counter-intelligence operative and his family who move in across the street from the Jennings. At one point, FBI guy asks to borrow Phil’s jumper cables for his car, standing mere feet from the guy the FBI is looking for as Phil takes the cables from his trunk, finger to his lips to keep his captive quiet. A bit of a stretch, to say the least.

The thing is, I wish trunk guy had pitched a fit and ended this entire thing because, well, I am a real American, and I just don’t want to watch the cold war bad guys achieve anything that will cost the good old U.S. of A., even if it is all just make-believe.

Fortunately, if I don’t want to watch, I don’t have to. And I probably won’t. Like I said, I want us to win, all the time–even if it’s only in my mind.