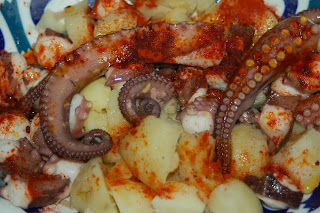 by Chrysa Smith
My fellow blogger Carmen is a good friend and a good cook. I’ve eaten her flambeed flan dessert, her chocolate cake, her Spanish tortas and cheese. So when she invited my husband and me over for dinner, I responded with an immediate ‘yes.’ Not only was it a chance to sample some authentic Spanish cuisine (She’s from Galicia in Northern Spain), but her son was home from school—-a chance to meet the family member I had heard so much about.
So Carmen ran a possible menu selection by me one night. She mentioned paella, calamari, some other seafood and octopus. I must admit, octopus did hang me up for just a minute. I wondered if it were a close cousin of squid and quickly dismissed it as something probably chopped and included in the popular Spanish rice stew. So I mentally categorized it as something new to try within a dish; something like Calamari—which I resisted for years before realizing that good, tender Calamari is absolutely delicious.
Long story short, the octopus was not part of the paella, but a course in and of itself. I watched as the multi-armed sea creature was submerged in a pot of boiling water atop the stove. Be open minded, I thought, as I watched the sea creature emerge from a quick, hot bath. But when Mark asked what the round white thing was on top, I knew I was in trouble—-for it was the head. And then I noticed the suction cups that line the tentacles. Gulp. Thank God there was Paella with chicken.
It’s partially a cultural thing. If you’ve ever watched Andrew Zimmerman’s show ‘Bizarre Foods’ you know that there are quite tasty protein dishes outside of beef, pork, veal, lamb, chicken, turkey and the usual array of American seafood. I’ve had Buffalo, Elk, Alligator and creamed herring (a Polish delicacy that’s quite tasy) on occasion. My dad had fancied Pickled Pigs Feet (yuck); other family members–Duck Blood Soup and something called Head Cheese (I guess the sea creature has nothing over this deli selection). I can’t say that any of these sat any better with my taste buds.
But it’s also a textural thing. As a young girl, my mother wound grind her teeth as I strained the pulp from the morning’s orange juice. I just hate anything with fiber floating in my liquids. Now, two decades later, my son does the same thing—long after I gave up drinking orange juice altogether. So it’s not an environmental thing; but an inbred, genetic hatred of stringy, pulpy things. I can’t eat an orange or any other fruit with strings, pits and pulp. 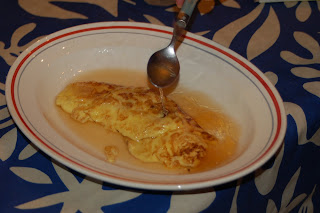 As for the dinner at Carmen’s, I did love the Paella, as well as the flambeed dessert—a simple cooked and flamed mixture of eggs, sugar and rum. What’s not to like? No tentacles, no pulp, no suction cups, no problem. Alimento bueno.

The dessert recipe? Simple and delicious. Beat several eggs together, pour into a greased omelet pan and cook/fold as an omelet. Place on an oven-proof plate, sprinkle well with sugar, drown in rum and ignite with a match; letting the alcohol burn off. Serve with a smile and a nice cup of espresso, coffee or tea.
For the paella, find a nice Rioja wine and follow this recipe: http://www.foodnetwork.com/recipes/alton-brown/paella-recipe/index.html
For the octopus? Well, you’re on your own with that one.
Mary Fran Bontempo2018-10-30T09:56:50-04:00September 16th, 2010|2 Comments