Revenge at the Hamptons

I went to the Hamptons this week. Twice.

The first time was on Tuesday, for a week-end gateway to celebrate Sarah Michelle Gellar’s birthday in Ringer (https://notreadyforgrannypanties.com/2011/09/lying-game-ringer.html).
The celebration included a private party on the beach with a table for four catered by the best restaurateur in NYC.
The food was delicious, Sarah Michelle Gellar’s character told us, but we didn’t see much of it because the show kept sending us back memory lane as she remembered the birthdays she shared with her twin sister, the evil sister she is impersonating now thinking she’s dead. But she is not dead, we viewers know, but flirting in Paris with a clueless American who doesn’t realize the blonde who has picked him up has an agenda.
I can’t wait to know what that agenda is.
My second visit to the Hamptons was on Wednesday night. This time I came to stay for the summer in the house our protagonist, a gorgeous blonde who dons red with glee, just bought from a couple whose divorce she helped finalize.
She had her reasons for doing so as the house is the home where she grew up with his loving father before he was framed and sentenced to prison, much like young Edmond Dantes in The Count of Monte Cristo. Unlike what happens in the Dumas’s classic, the father dies and it’s the girl, who has returned, 15 years later, to get her revenge on the people who ruined him. 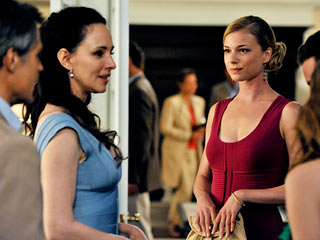 I must confess I love this show. I love the evilness of the bad guys and the sweet innocence of the devious protagonist, who keeps her cool and perfect looks while playing with the people she once knew as a young girl and that she’s now intent on destroying.
I love the nice, good-looking guy who was her friend when they were children and has kept her dog and a torch still burning for her. And I love the geeky filthy rich guy who hangs on the outskirts of the social aristocracy of the Hamptons, with a pale, unhealthy looking face and the worst outfits money can buy, watching the drama unfold.
Revenge is a delicious tale you’re invited to watch with me next Wednesday on ABC at 10/9central.
Don’t forget. It’s a date.
Mary Fran Bontempo2018-10-30T09:54:14-04:00October 7th, 2011|0 Comments