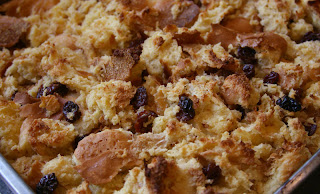 When I first blogged that I would be blogging about winter comfort foods, I heard from a faithful subscriber. Puddin, she said (She’s from the south, and I have to admit, she did say pudding, but I do love the homey southern slang, y’all). So, puddin it is.
I must admit, when I was thinking comfort food, I hadn’t thought of puddin. Meatloaf, mac and cheese, crock pot meals, stews and soups were the staples that came to mind. It’s probably because I like a good healthy dose of chocolate, dairy and sugar any time of year—although in different forms. But our southern belle is right on: puddins are comfort food year round. And after this record January snowfall in the MidAtlantic, I’m all for comfort, food, a trip to Florida and an early spring. And I’m also a recent convert to the texture of pudding: especially the type that involves leftover bread.
Just this weekend, when I needed a quick dessert to follow slow cooked short ribs and mashed potatoes, I opted for a chocolate puddin pie. It was no work of art—-instant pudding in a pre-made graham cracker crust. But it was tasty; especially topped off by a little heavy whipped cream with sugar and vanilla. But my most favorite comforting cold weather dessert has got to be Bread Pudding.
I once thought puddins made from rice or bread were just weird. I wanted a cake, a cookie, a textural substance that wasn’t something thrown together from yesterday’s leftovers. Then I grew up. I realized that some of the tastiest, most comforting meals are exactly that—from bits and scratches of old fashioned, economical, green cooking—the kind that came down from my depression era relatives: using what you have in the pantry to make something tasty—and not, if you can ever help it, waste a bit of precious food.
So, when I was at Vintage at Morgan Hill, a restaurant I blogged about awhile back (Easton, PA), I ordered my first bread pudding: Chocolate Bread Pudding with a splash of Jack Daniels. Ummm, good. You gotta love it. It was hot, full of carbs, chocolate and liquor. Wow, what a taste sensation that ended the meal on just the right note.
So this holiday season, I decided that Chocolate Bread Pudding was just the thing to warm the hearts and stomachs of family and friends—and that it did. You can find recipes most everywhere—-but this one was simple and a keeper, even though it didn’t invite a bit of Jack to the recipe. Eight basic ingredients of the fridge and pantry. Test it with a combo of breads, including a Challah (sweet bread), brioche or even croissants. Try it one night and see what you think. You can always invite Jack, Jim Beam or Captain Morgan to your own table, under separate cover.
http://www.thatsmyhome.com/chocolate/brpudding.htm
Mary Fran Bontempo2018-10-30T09:56:27-04:00January 27th, 2011|2 Comments