This week in Entertainment we bring you reviews on more
Best Picture Oscar contenters!
First up–Chrysa Smith on Brad Pitt and Moneyball
then, scroll down for two opinions on Woody Allen’s
Midnight in Paris from Carmen Ferreiro-Esteban and
Mary Fran Bontempo.
Be sure to scroll down the page so you don’t miss a thing! 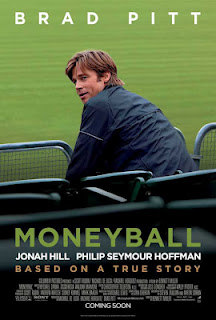 Ah. It’s spring training time. And whether or not you follow America’s game, you’ve got to like the odds on Moneyball.
The Brad Pitt picture follows the somewhat true tale of manager, Billy Beane (played by Pitt) and his small budget Oakland A’s franchise, as they try to compete with the big markets. Like many fans who root for smaller town teams know, budget restraints keep these teams from attracting the big money talent, making it unlikely to have a string of super stars on the roster like the New York Yankees. So, what’s a manager supposed to do? Think outside of the box.
Billy Beane defies all tried-and-true baseball protocol in exchange for hiring a math/computer geek Peter Brand, played by Jonah Hill. Together, they throw out all logic and history and opt to find a new way to win. Statistical analysis of the ‘record books’ lead the A’s to look at a group of ‘misfit’ players in a whole, new way—hiring the old, the injured, the forgotten based on their stats to field, hit and more.
While I had my doubts about a ‘pretty boy’ playing the role of a classic baseball manager (the images of tobacco-chewing, crotch-grabbing, sun-hardened old men come to mind), I had to say, that Pitt did the job justice. He came across in a most believable way, as did Jonah Hill.
In the end, as with many a happy ending, despite the criticism of everyone surrounding them, Beane and Brand take the team to new places; Beane to a journey of discovery never imagined.

Moneyball is up for several Oscar categories including Best Picture, Actor and Supporting Actor. And yes, the fellas will like it, but the gals will too.