Over the last few months I have returned to one of my first loves in television, PBS Masterpiece Theater.

I used to watch it all the time, but then in 2004 came Desperate Housewives (ABC) also at 9 PM on Sundays and, alas!, I fell for the crazy women of Wisteria Lane and their convolutedly crazy lives.

Fear not, I have not deserted them, but now, thanks to my savvy new TV, I can record one program while watching the other, and so it is that I have watched in chronological order: Sherlock, My Son Jack and Downton Abbey in Marterpiece Theater.

Sherlock (http://www.bbc.co.uk/programmes/b00t4pgh) a three episode series follows the most famous detective of them all and his sidekick Dr. Watson in London. The twist? It is XXI century London we are talking about.

The translation of Conan Doyle’s stories to our time is cleverly done and the actors a wonder to watch. Keeping with the times, Watson recounts their adventures in–you guessed it–a blog. 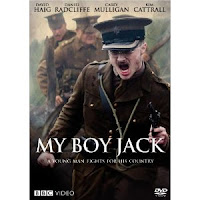 My Boy Jack (http://www.pbs.org/wgbh/masterpiece/myboyjack/index.html) is a sober drama set in 1914-15 at a time when Germany prepares and eventually declares war to England. As the story starts, Jack, played by Daniel Radcliffe of Harry Potter’s fame, is seventeen and eager to become an officer to prove himself a man to his famous father Rudyard Kipling (the author of The Jungle Books).

Written as a play in 1997 by British actor David Haig (who plays Rudyard Kipling in the movie), My Boy Jack is based on the moving Rudyard Kipling’s poem of the same title you can read by clicking here http://en.wikipedia.org/wiki/My_Boy_Jack_%28poem%29.

On a lighter tone, Downton Abbey, a gorgeous period drama, follows the lives of an aristocratic British family and their servants. The four one hour and a half episode series starts in April 15, 1912 (the day the Titanic sank) and ends in the summer of 1914 as Great Britain declares war on Germany.

Although Downton Abbey takes place a whole century after Jane Austen wrote Pride and Prejudice, the premise of the story also springs from the rigidity of British laws that deny women the right to inherit property. As was the case with Elizabeth and her sisters, Mary, Edith and Sybil the daughters of the present owner of Downton Abbey will lose money and state to a distant cousin upon their father’s demise.

This is not surprising in a society that considers women inferior. As the dowager countess, played to perfection by Maggie Smith, tells her younger granddaughter who supports the women’s right to vote, “Women don’t have opinions until they marry. Then, their husbands will tell them what to think.”

The first season of Downtown Abbey ended last Sunday. The second one is in preparation. In the meantime you can revisit the series for free or watch it for the first time if you haven’t watched it yet at http://www.pbs.org/wgbh/masterpiece/watch/index.html

And don’t forget to tune your TV to PBS Sundays at 9 PM and watch Masterpiece Theater. If these last three shows are any indication, you will be glad you did.