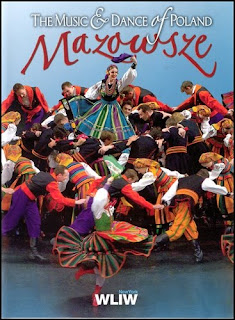 Quick! Get thee to some culture!

That’s my cry after too many cold nights curled up on the couch with the sorry tales that make up our daily news– and some of the mindless entertainment that makes up my television viewing (except for SingOff, and reruns of Seinfeld, Two and a Half Men, Spin City and Just Shoot Me).

So it was with great delight and quick action that I sprang for two orchestra seats to take my mom (and myself) down memory lane and across the Atlantic (well, mentally), for an afternoon of beautiful singing and dancing from the Mazowsze(phonetically, that might be mah-zuf-che) Polish Folk Group.

Now on their 60th year, the coed ensemble out of Northern Poland, complete with orchestra, tours the US on a sporadic schedule, drawing rousing applause from their Polish-American fans who delight in singing along with the familiar tunes; clapping loudly with the stomping beats.

The costumes are vibrant and diverse, the gals and guys, young and sweet, and the music; either ethereal and heavenly or bold and forceful. But perhaps most of all—different. 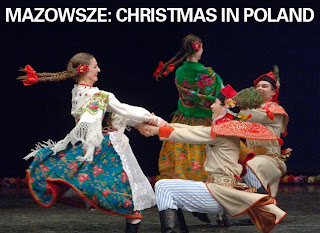 I so dislike the concept of everyone and everything being the same. I indulge the view that everyone is equal; but certainly not the same. That’s what makes the world interesting; so delightful. That every so often, we crawl out of our familiar shells and encounter something new, something great, something interesting. It expands our minds and our lives and makes us just a bit more curious, interested, understanding about other people, other cultures, other lives outside our own boxes.

This group was started in the mid 1900’s, by a professor and his dancing wife, who determined that if they had survived the war, they would piece back their national cultural treasures by forming a folk group, that kept the regional songs and dances alive. And that’s just what they did: mazurkas, polonaises, waltzes, krakowiaks.

These are not the played out tunes on the radio, the regurgatative reruns on tv, nor even the good reads that can open our minds—-but an interactive, live and shared experience.
If you’d like to sample a little Polish folk culture, check it out on:
http://www.youtube.com/watch?v=0BRMkb3bcmw&feature=related (and wait just a minute or two before the dancing breaks out). If you’d like to sample something for yourself, check out the local theater listings—whether it be small, college community groups or major Broadway productions; maybe even something from another culture. 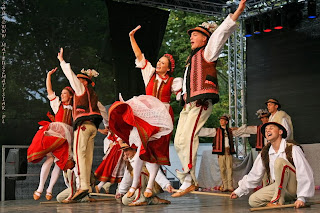 I saw men down on the stage, stomping, kicking, twirling hatchets, dancing with sticks and handkerchiefs, lifting their dance partners into the air—-traditional, civilized, mannerly, beautiful. Their voices, their energy, their choreography were all accurately summed up and rightly inserted into their title: The Magnificent Mazowsze. (and their darling, red, lace up boots were pretty magnificent too—I’d like to know where I can buy a pair).