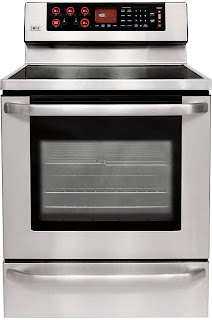 On the week of a thousand failures, my range was one of the victims.

The stovetop still worked, but the digital display for the oven, clock, other settings just died. At first, I thought it was the circuit breaker. When that didn’t work I called the service man to come take a closer look.

A five year old range that maybe cost me $750+/- would now cost me $650+/- to be brought back to life. I told him to forget the fix and give me a coupon toward a new appliance.

After the anger and lack of warranty coverage, I started doing some research. You know I’m the foodie who generally likes to cook. So I decided if I was going to invest in another range, it would be gas (rather than the electric I’ve had for years) and it was going to be one without ridiculous settings for things like chicken nuggets. I just want heat—and I’ll make my own decisions about how and what to cook.

So, here’s the deal. If you want a residential-type range from the local appliance store, it’s got the digital stuff. It makes money on repair since digital circuit boards will fail, and then a $50 fix will cost you $650. So, I’m moving on up to the commercial stoves—-just knobs and heat, like my mom cooked on years ago—when a range cost under $200. In the end, you have to pay more for a commercial range to get less technology (bells and whistles), but longer-lasting durability(the ability to keep on cooking)….go figure. I don’t want my range to look like the instrument controls of a cockpit. I just want to saute, boil, blanche and get on with my daily bread!!!