Going for the Yoga Gold 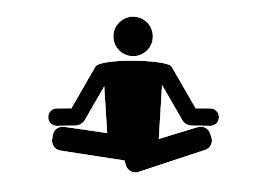 Over a year had passed since I last set foot in a yoga studio, so when I joined a new gym this summer, I chose the yoga class specially designed for us Golden Agers. You know, us baby boomers over 65. Or 55. Or 60, depending on whom you ask.

Anyway, I fit into all those slots. And since I had hurt myself a couple of times doing yoga, but loved the peaceful atmosphere of the studio and the awesome feeling of stretching, I decided Yoga Gold was just the ticket.  My favorite pose, after all, was savasana: the corpse. You lie down on your back and close your eyes, impersonating a corpse with slow shallow breathing for about five minutes at the end of class. Can’t hurt myself doing that.

So I figured: I know yoga. I can do this, I’m sure I’ll like it. Arriving at the gym, I removed my shoes and placed them in the little cubby outside the studio, so as not to disturb the “sacred space.” I knew the drill. I smugly stashed my car keys in the toe of one shoe and my sunglasses inside the other.

Taking a mat from the corner of the studio, I looked around for a place to unroll it on the floor. Many students had already set up their spaces, and I noticed they also had blankets and small white towels, also stacked in a corner, so I took one of each. This was a little different, but what the heck, my golden self knew what she was doing.

The loud buzz of voices in the room raised my anxiety level just a notch. My previous non-gold yoga classes had a calm and peaceful atmosphere. No talking, just breathing calmly, as you sat awaiting the instructor. But every class is different, I reasoned while trying to connect with my inner Zen.  I unrolled my blue rubber mat in what I thought was the back row. Gray-haired women smiled and chatted among themselves, from time to time stealing glances at me. Then, a tall, husky man I estimated to be in his seventies stalked over to me trailing his mat behind him.

“What’s your name?” he boomed down at me. I told him and asked, “What’s yours?” but he stalked off to talk to the other goldens.  A pleasant looking woman asked me if I had been there before, and clued me in: the people in this row “are used to their spots.” The seventy-year-old guy was by now questioning a short woman with dark brown hair who I later learned was ninety-four about whose mat she wanted next to hers, “but not on top of you, right?” He let out a loud guffaw. They both peered at me and shuffled their mats around. Yikes.

Around me, other goldens talked about orchids and amaryllis as winter houseplants. All this commotion inspired me to move my mat to another spot, which turned out to be the front of the room, near the instructor. Even here, his voice was so low I could barely hear him. Actually, I couldn’t hear him at all. “That’s okay,” one of the other students said, “Just follow along.”

“Come closer,” the instructor commanded, “I don’t bite.” I declined; if I went up to where he was pointing beside him I wouldn’t be be able to see what he was doing without putting a crick in my golden neck.

I stuck it out and finished the class, disappointed and not feeling the inner peace I had come in expecting. And there was no savasana at the end! No corpse pose in Yoga Gold! Hmmm….

I went out on the main gym floor and began my weightlifting circuit to combat my golden osteoporosis. One of the gray haired goldens came over and said she hoped I’d be back. “Oh, sure,” I said, but I was just being nice. This was not the peaceful yoga class I was expecting. I guess I am getting set in my ways, even if my golden hips are flexible as can be. Being of a certain age has taught me I don’t have to stick with most of the things I don’t like. So the next week, I went to the class that makes me smile: Zumba Gold. But that’s another story.

Linda C.Wisniewski  writes for the Bucks County Herald and the Bucks County Women’s Journal. She has been teaching memoir workshops throughout the Philadelphia area for more than eight years. Her memoir, Off Kilter, was published in 2008 by Pearlsong Press. Visit her website at www.lindawis.com.