George Clooney and a Tool Belt 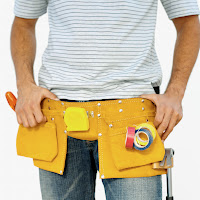 Oh, George. I hope this doesn’t break your heart, but you’ve been replaced.

As much as you and your glorious “Clooney-ness” have occupied my thoughts over the years, there’s a new man in town.

I’ve got men, lots and lots of men, on the brain. They fill my thoughts, my dreams, my fantasies. And my husband has no problem with it at all. He’s hoping my imaginings become reality, and the sooner, the better.

You see, the men I’m fantasizing about are a very specific breed. I’m not concerned with their looks, or their age or their attire. In fact, most of them are somewhat infamous for a particular defect in their attire: their pants don’t always cover their, um, posteriors, often leading to a partial view of the backside in question.

Nor is hygiene a particular concern. Most of the fellas I’m enamored with sport significant amounts of dirt on their persons, particularly under their fingernails. It would be downright nasty if it weren’t so beautiful.

Like most folks, the economic downturn has forced us to scale back on all but the essentials. We’re taking care of business (and three kids, five cars, multiple necessary electronic devices, etc.) but that’s about it. Extras and anything that can be put off has been. So the home repair list keeps growing exponentially, every time I make a pass through the house.

There’s the bathroom plumbing issue, the window issues, the deck problem, the dying trees in the yard, the kitchen plumbing issue, the painting I’d like done in the family room and so on. Consequently, while George in a tux driving up to my house in a limo has always been my go-to fantasy, now, all I can think about is a disheveled guy named Chuck or Walt or Pete rumbling to my door in a ten year old pick up, wearing a giant tool belt and a pair of filthy jeans with plumber’s/electrician’s/contractor’s crack greeting me when he bends to look at the pipes under the sink.

He’ll take out his flashlight, fumble through his tool box for his wrench, grunt, groan and maybe even swear a bit before resurfacing, wiping sweat off his brow. Then he’ll look at me, mumbling, “All finished; It wasn’t as bad as I thought,” before handing me an invoice with a sum at least a hundred dollars less than I expected. As I hand him a check, he’ll grunt, “Sign here,” followed by “Have a nice day, ma’am,” before leaving a dirt trail out the front door. I’ll sigh and smile, not even minding being called “ma’am.”

Yet, sooner or later, the economy has to get better. Since I have been known to be somewhat fickle, once things ease up a bit and I can get the repairs handled, I’m sure George will return to his rightful place in my dreams.

But for now, unless he’s willing to show up at my house and fix the leak in the shower, I’m casting my lot with Chuck, his grimy nails and his plumber’s crack. Because beauty is truly in the eye of the beholder.