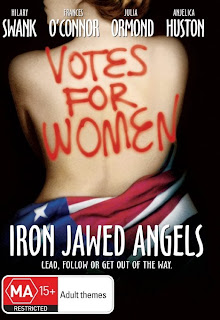 My mother-in-law is great at discovering bits and pieces of obscure history; especially about women’s roles, rights and resistance. So, when she received an email outlining the discrimination, abuse and violence that the woman’s suffrage movement encountered some 90+ years ago, she did a little digging. And that digging led her to a movie called Iron Jawed Angels, and a woman named Alice Paul.
While I haven’t seen the film, I intend to. Because after a little digging of my own, I too have uncovered a little known piece of history that I never learned in school; and that is that women endured about seventy years of lobbying before they got the right to vote, including Susan B. Anthony’s early suffrage efforts, White House picket lines, jail time, physical violence, smear campaigns, psych evaluations, in-fighting and the wrath of a war-time president (namely, Woodrow Wilson).
Susan B. Anthony got her face and name on a coin for her efforts, but Alice Paul, a Quaker gal from Moorestown, NJ (and her sidekick, Lucy Burns –a Vassar girl from Brooklyn) have still yet to coin much. Why? Was it because Alice Paul and Lucy Burns bucked a system which Susan Anthony was a bit more willing to work within? I don’t know. But I do know that while we women have come a long way, many of us are still fighting for equal rights—-at home, in the workplace and in the voting booth.
Women still don’t have the right to vote in Saudi Arabia, yet they had the right to vote in New Zealand, Russia, Poland, Australia, Austria, Germany, Estonia, Denmark, Canada, Finland, Iceland, Ireland, Norway, Sweden, Latvia and the Netherlands (to name some better known countries) before our fore-sisters. Surprised? Me too—but I’m always surprised to discover a piece of history that I think I should know.
Maybe I wasn’t listening too well back in high school. Maybe I was too busy looking at those football players and musicians. Or maybe there are just a million pieces of historical information out there that have just gone unnoticed. Yah, I think that’s it. Somehow these interesting tidbits don’t make it into the core curriculum.
Oy! I don’t know about you, but I’m tired of fighting for recognition, validation, equal rights as a woman and author, appreciation from my family, courtesy from others, etc, etc, etc. Now I know why Greta Garbo coined that famous line: “I want to be alone!” Maybe she was tired of fighting the good fight too. And in my older age, I like her motto. I do like to be alone a lot more than ever—-as long as I can bring a glass of wine and my laptop to keep me company.
Note: Fellow-blogger Carmen Ferreiro, an avid reader, discovered a new book about Alice Paul entitled A Woman’s Crusade, Alice Paul and the Battle for the Ballot, by Mary Walton. http://www.marywaltonwriter.com/index.htm
Do you ever have a week when you feel like all you do is fight for things? Pull up a glass of wine and vent!!
Mary Fran Bontempo2018-10-30T09:56:47-04:00October 13th, 2010|4 Comments