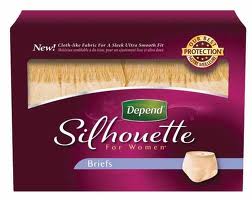 Well ladies, it seems we’ve arrived. Despite years of mortification at the squirts and drips that accompany a hearty laugh or an unexpected sneeze, it’s finally chic to pee your pants.

We’ve all been there. A gal is out in public, having taken great pains to tape and spackle everything in place. We’re looking good and feeling fine. We’re standing amid a group of friends when, forgetting ourselves for just a moment, we give in to a good joke, indulging in a belly laugh and suddenly, there it is, that dampness that, despite our age, makes us feel like a two year old.

For one out of every three women, LBL (Light Bladder Leakage–don’t you love it?), is a disturbing fact of life that keeps us constantly on the prowl for the next closest ladies’ room. It’s just another of nature’s cruel tricks. First half of adulthood spent looking for bathrooms for the kids, second half looking for ourselves. The need to pee, and the fact that you’re going to, whether you’re in a bathroom or not, has more than a few of us planning our lives–how much, and when, we drink, whether we sit or stand in public, etc.—around the proximity of a bathroom.

One of my cousins, who shall remain nameless for her own protection, has gone so far as to scope out the locations of every clean bathroom on the three block walk between her workplace and the train. “It’s three blocks! You’d think I could make it three blocks but I can’t. I know where all the nice bathrooms are–Macy’s, the Loews Hotel, the Marriott. I know all the doormen. I’m there every day after work. They probably think I’m a prostitute working the building but I can’t help it; I’ve got to go!”

But we need be embarrassed no longer. Depends, yes, the adult “diaper” Depends, has recruited none other than sexy, skinny, Hollywood darling Lisa Rinna to pop on the panties in a hilarious new ad showing Rinna on the red carpet with confused husband, Harry Hamlin, by her side.

Asked by a spokesman if she’ll try on the undies beneath her slinky gown, Rinna gamely responds, “Sure!” returning to the red carpet moments later with nary a bunchy diaper line anywhere to be seen. Even Harry is convinced as he surveys his wife’s shapely bum, now protected from unwelcome dribbles and drops. Rinna delightedly struts and twirls, Depends providing the fortification to allow her a red carpet evening complete with standing, laughing or sneezing—unpunctuated by a half dozen potty breaks.

Let’s face it, nothing is going to keep us from peeing ourselves (thank you, Mother Nature). But if we can look half as good as Lisa Rinna, while freeing ourselves from constant bathroom surveillance despite the occasional drip, maybe feeling like a—very chic—two year old isn’t so bad after all.