Cleopatra: The Search for the Last Queen of Egypt 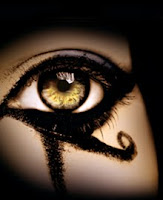 She married her brother at 17 upon the death of their father and were both declared pharaohs, the living gods, and rulers of Egypt as their ancestors had for three hundred years since Ptolomeo came from Macedonia, a general in Alexander the Great army. 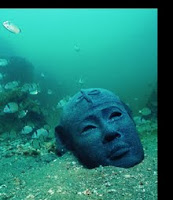 When her brother drowned in the port of Alexandria, Cleopatra married her eleven year old brother as she was expected. But when the Romans came with their legions intent on conquering her rich land, she became Julius Caesar’s lover and gave him a son. She planned their son would one day rule both Rome and Egypt. It was not to be. In 44 BC Caesar was murdered and Cleopatra returned to Egypt with her son while in Rome Octavian, Marco Antonio and Marcus Lepidus shared power. 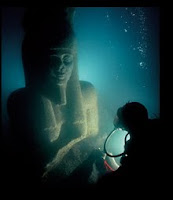 Marco Antonio was sent to subdue Egypt. Instead he became Cleopatra’s lover. An angry Octavian called him back to Rome and forced him to marry his sister. But soon Marco Antonio returned to Egypt and, wife or no wife, resumed his love affair with Cleopatra who, in the meantime, had born him twins. 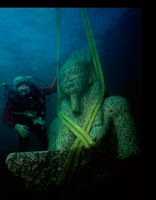 Cleopatra and Marco Antonio lived lavishly in Alexandria with their three children and Cesarium (Cesar’s son) while Octavian in Rome readied himself for war.
Octavian won the war, history teaches us, and Marco Antonio, thinking Cleopatra was dead, killed himself. Cleopatra died too, bitten by an asp according to legend, and her children were taken prisoners to Rome.

The Roman conquerors proceed to erase her effigy from temples and her name from records, yet she is still broadly remembered today, while the name of her enemies are known only to historians.

Cleopatra was beautiful. But what makes her a fascinating figure was not her beauty (that she kept by bathing in goat milk as Bob Sandewicz reminded us Wednesday on his blog) but her wit, and intelligence. Apart from the Greek, the language her ancestors brought to Egypt, she spoke Egyptian and five other language and she was equal to men on politics and strategy and was also knowledgeable on healing herbs and potions. 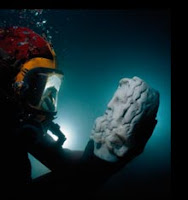 Earthquakes and tidal waves destroyed Canopus and Heracleion, two cities were Cleopatra lived and the coastal part of old Alexandria. Starting in 1992, Franck Goddio and his European Institute of Underwater Archaeology have recovered many artifacts from the ocean floor. 150 of these, from impressive statues to delicate jewelry, can be seen through January 2 at the Franklin Institute in Philadelphia (http://www.fi.edu/cleopatra/). They reveal a magnificent world long gone and yet strangely familiar. The world where Cleopatra lived and loved. It is a beautiful exhibit for a beautiful queen.