This week in entertainment–

Get Ready for Black Friday Shopping with BFAds.net

Plus, a Review of the New Denzel Washington Movie, Flight

Be sure to scroll down so you don’t miss a thing!

I don’t know about you, but the last thing I feel like doing on Thanksgiving night is hauling out a 24 pound newspaper and scouring it for Black Friday shopping deals. (What I really feel like doing is lapsing into a tryptophan-induced coma.)

But as the day after Thanksgiving officially marks the start of the Christmas shopping season, there are fabulous deals to be had and schlepping through page after page of advertisements is traditionally the way to find them.

Ladies, there is an easier path.

I don’t know how the site started and I don’t care. What I do know is since I signed up to start receiving emails two years ago, BFAds.net starts sending me notifications about sales sometime in late October and continues right up until Cyber Monday (the Monday after Thanksgiving, when great bargains are available for online shoppers).

The site lists stores offering specials on the left-hand side and recent Black Friday activity on the right. Plus, there’s a chance to win prizes if you enter the monthly drawing. You can scour the site and make lists well ahead of shopping day to prepare your game plan.

All you have to do is sign up to receive emails whenever new ads are posted. And once the sales are over, BFAds disappears until next year; no pesky follow-up stuff.

It’s a time-saver and frankly, it’s awesome. Check it out and save yourself tons of time and aggravation. That way, you’re free to take a well-deserved nap before the madness begins. Go tryptophan! 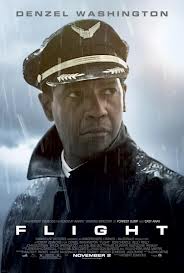 By the time it was over, we were exhausted.

Watching Denzel Washington land a crippled airplane with 102 “souls” on board was harrowing enough.

Watching him fight the demons of drug and alcohol addiction for over two hours was worse.

In Flight, Washington embodies the pilot, Whip Whitaker, a train wreck who flies planes when he’s not getting drunk or snorting coke. The movie opens just before Whip and one of his flight attendants board the fateful flight, after they’ve boarded each other and consumed Lord knows how much alcohol. It’s okay, though, a quick line or two of coke and Whip feels awake enough to fly.

Whip’s co-pilot suspects that all is not well with Whip, but defers to the senior flyer. And when all hell breaks loose due to a mechanical failure, Whip astoundingly rises to the occasion and manages to land the aircraft, losing only four passengers and two flight attendants, one being his bed-buddy from the night before.

If we didn’t know what we know, Whip would be a hero. But we do know, and soon, via a toxicology test done when Whip lay unconscious in the hospital, so does the pilot’s union, their lawyer and other people investigating the crash.

What follows is some truly scary stuff, from Whip’s free-fall descent to the fact that people responsible for passengers’ safety on the airlines spend tons of time and money trying to cover up the fact that their employee was drunk and high when he accomplished his miraculous feat.

The movie is not for the faint of heart, though Washington is stellar, as always. (And in his pilot’s uniform, striding down the hallway of his hotel, the man is a specimen. Be still, my heart.) If you spend any time on airplanes, start packing your rosaries, or prayer beads, or whatever you use to connect with your higher power and be prepared to use them.

Upon leaving the theater, I turned to my husband and said, “I think I need a drink,”–not the best choice of words after witnessing alcohol’s destructiveness. The difference is that I could stop–usually after just one, while Whip was incapable of stopping, until he passed out.

Flight is a great movie; just don’t plan to do much afterwards. You’ll be too spent. Check out the trailer below and let us know what you think.