Being A Kid Again 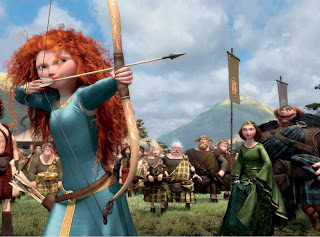 I like to think of myself as a realist: a romantic, but fairly realistic. And sometimes, you know, you just have to regress for mental health sake. So I’m putting it out there. Get out of adulthood for awhile, and be a kid again.

Get out the hula hoop, the pink bike with the streamers or in my case, a Disney movie, and feel the exhilaration of being 30, 40, 50 years younger—at least for an hour or two.

This is nothing new. I know all about rediscovering childhood loves. But life seems to get in the way and before you know it, it’s like you have to learn it all over again.

So yesterday, I went with a friend to see Brave. I didn’t know what to expect since I’m long past the animated Disney films, knew little about it and was there at my friend’s prompting. So, when I sat down in that empty theater for a matinee, I spent the next 1 1/2 hours in another time, place—and I must say, it felt so good.

Brave is the animated story of a rebel princess: she doesn’t want to live the life of a royal girl; maybe not a girl at all, as she flits from one adventure to the next. But, as life goes, duty calls and she finds herself in a sticky situation. Smart as a whip, she outsmarts her suitors and her parents (especially her ‘drag’ of a mother), as she calls forth some magic and transforms her mother into a bear. After a long series of zany events, and her mothers life in danger, they both realize that compromise is key to healthy, succesful relationships.

Hard to believe? Yes. Predictable? Totally. But the grand animation and action are so engaging, I felt like I was running through the forest with the characters–chasing ‘wisps’ (little, ethereal and fleeting blue lights) and galloping on the cutest of horses. In short, I felt like a kid again. And I’m so glad I went.

So, the next time an animated kids movie stirs some buzz, take your friends for a girls night out–and for drinks afterwards. After all, one can’t stay a kid forever.