Atlantic City–DayTripping or Vacationing, There’s Something for Everyone

First Up, Day Tripping on the Atlantic City Shore Line

Next,  Scroll Down to Read About Our Beautiful World in the Discovery Channel’s Frozen Planet

And Finally, Keep Scrolling for a Review of the New ABC series Missing, Starring Ashley Judd 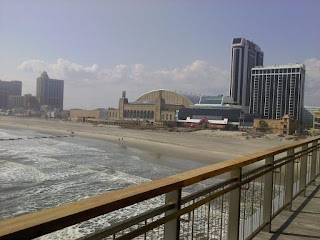 Sometimes, all it takes is gelato.

Of course, an afternoon strolling along the boardwalk next to the magnificent Atlantic Ocean without a jacket in the middle of March doesn’t hurt either.

So it was last week when fellow NRFGP blogger, Chrysa Smith, and I happily found ourselves walking the Atlantic City boardwalk, enjoying the unusually warm temperatures, the ocean view, and of course, the gelato.

That would be enough for two beach lovers, but we were, after all, in Atlantic City, a seaside resort offering a multitude of man-made pleasures in addition to nature’s glory.

After our initial stroll, we stopped in at The Pier Shops at Caesar’s , a three story shopping mall across from Caesar’s Casino (where we’d purchased that fabulous gelato). The Pier is home to two floors of high end shops, including Tiffany’s, Luis Vuitton, Burberry, Coach and Gucci, along with more affordable options such as The Levi’s Store, Victoria’s Secret and The Sunglass Hut. Perfect for window shopping and daydreaming.

The third floor hosts multiple restaurants ranging from Buddakan, with an Asian themed menu, to Philips Seafood, to the Piazza Di Giorgio Café, specializing in fresh salads, delicious soups and gourmet sandwiches. The café’s cafeteria style service along with the tables overlooking the Atlantic proved the ideal spot for lunch. 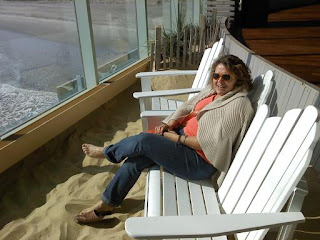 Yet, one of the best seats in the house at The Pier won’t cost you a penny, as we found after our satisfying lunch left us full but not quite ready to move on. Wandering over to a gigantic bank of windows, we settled into comfy Adirondack chairs perched on an indoor beach that ran along the entire length of the third floor. Delightful.

Next up, another stroll, down the boardwalk to The Quarter at the Tropicana. Suddenly, instead of spending an afternoon on the Jersey shoreline, we found ourselves in Old Havana, walking quaint streets lined with shops, restaurants, an eternally blue sky and palm trees. Palm trees. In Atlantic City. 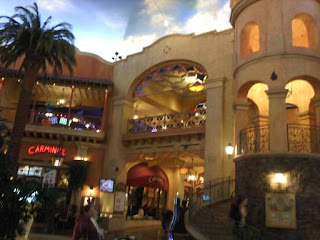 Okay, they weren’t real palm trees. But the recreated Havana street scene sure felt like the real deal. Add great shopping, more fabulous restaurants, an Imax theater plus nightlife and The Quarter offers still another reason to head to the coast, even if temperatures aren’t conducive to an afternoon on the beach.

Of course, an afternoon isn’t enough time to truly experience Atlantic City. And admittedly, parts of the town leave much to be desired. But this grande dame of the Jersey shore points has much to offer in addition to casino gambling, including free beaches, superb restaurants, shopping to fit every budget and exciting night life.

If you’re local, A.C. is a quick hour over the Walt Whitman Bridge from Philly. If you’re further away, consider a stay in Atlantic City. It’s not quite Las Vegas, but that free beach? It makes up for quite a bit.