A Window into the Holidays 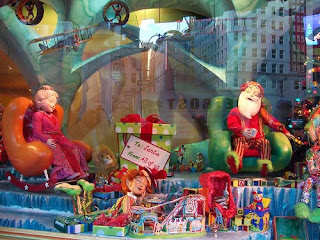 Whether you like Manhattan or not, you’ve got to admit, there’s nothing quite like Christmas time in the city. Big decorated trees, with perfectly placed ornaments. Life-sized angels, snowflakes, packages. Glistening lights, the sounds of the Salvation Army bells, the smell of chestnuts actually roasting on an open fire– and of course, those wonderful department store window displays.
It used to be, that my long-time friend Carol, who worked down the block at Rockefeller Center, would meet me for the annual tree-lighting. At that time, it wasn’t a nationally televised event, with celebrity guests and hosts. It was more like a 20 minute event with ice skaters and local celebs or politicians pressing the button that would hopefully light up the big evergreen. 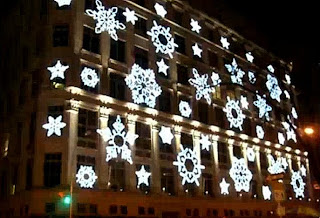 Of course, like everything else, it’s
gotten bigger, grander, more techy, more commercial. Too bad—-but still, if you want to get in the holiday mood, you needn’t enter a mall, you needn’t stand with thousands at that famous tree. All you need do is take a weekday afternoon and plan a tour of department store windows. That’s right—walk the streets, get some exercise and fresh air (well, as fresh as air in the city can be). After the cost of getting there, and a nice lunch (standard fare), you can get all holidayed up without spending another dime.
Get off your train at Penn Station or Port Authority and make your way to Macy’s (Miracle on 34th St & Broadway), over to Fifth Avenue & 39th for Lord & Taylor, then uptown on Fifth to Saks Fifth Avenue (across from the skating rink/Rockefeller Center Tree–49th), Bendel’s, Bergdorf Goodman (all in the 50s on or near Fifth Ave.) and finally to Barney’s, where a display of famous chefs in action sounds like a hoot, besides a holiday display (61st & Madison). You can continue onto Bloomingdale’s if you like (which is nearby), although for some unknown reason, I don’t include them in my window-gawking escapades; I think for several years the displays were way too funky/modern for me.
Do at least three and you’ll feel like a kid again—then treat yourself (and a friend) to a kid’s holiday treat—frozen hot chocolate (much too large and good for one) at Serendipity’s on the Upper East Side at: 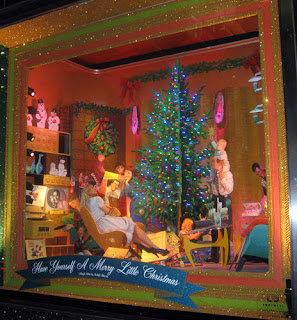 http://www.serendipity3.com/main.htm You’ll likely sense a familiar vibe here too—-once famous hangout (maybe still is) for celeb adults, kids and a few movie scenes (including One Fine Day, with George Clooney & Michele Pfeiffer).
Carol and I are making this trip happen next week—well at least the windows. Don’t know if we can still handle the calories of that frozen hot chocolate—but another benefit of walking Christmas in the city? Lots of calories burned while chatting and sight-seeing, without ever putting on those hidious running shoes.
__________________________________
Can’t get to NYC? Then check out the outdoor holiday displays & concerts in your own town. You can save the exorbitant price of parking and take a virtual tour of the NY displays at: http://www.nydailynews.com/lifestyle/2010/11/18/2010-11-18_new_york_city_department_store_window_displays_evoke_holiday_magic.html

What is your favorite ‘feel like a kid again’ Christmas tradition? What happens in your city?