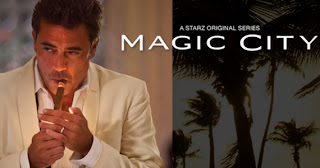 by Chrysa Smith
The glitz. The glamour. The seductiveness of it all.
Welcome to 1950’s Miami; the eastern counterpart to Hollywood, where celebrities, mobsters and of course, politicians mingle, schmooze and create drama that could be—well on a tv series known as Magic City.
The Starz mini-series airs Friday nights at 10pm. And while I’m generally hanging my head in sleepiness at that hour (maybe I am ready for granny panties?), Magic City generally, has me up to watch the latest affair, murder and back-room deal.
The series focuses on Ike Evans, played by Jeffrey Dean Morgan, a likable guy and owner of the grand Miramar Playa Resort. His wife Vera, a former show girl, must now play mom to Ike’s three children—the result of an untimely death. Vera likes the glamorous life, and while currently a ‘good wife’, I’m guessing her past has a hold on her, as an old flame has just entered the scene.

But more pressing than that is Ike’s darker side–his connection with Miami’s mob boys–and financiers of the luxurious resort. They’ve ensured that acts like Sinatra and iconic families like the Kennedy’s keep coming back–and nobody, but nobody gets in the way of a lucrative deal and their very cushy playground.  But of course, back-room mob deals don’t always end well.

Dead bodies in bathtubs, death threats dot the landscape as the latest, potentially fatal interaction looms on the horizon—Ike’s son, Stevie is, how should I say, hooking up with (head mobster) Ben, aka ‘The Butcher’s’ unhappy wife. Temporarily good for the lovers; not so well for a vindictive mafia hubby.

The cast of character’s, while virtually unknown to me, is well-chosen, both for it’s actors and the motley group that is quite feasible.

Looking to spice up your Friday nights? Tune in tonight. You can catch up on a few episodes at www.starz.com.